For several years, rexx systems has been the fastest growing provider of modern HR software with a particular focus on talent management.

In recent years, the company has won on numerous occasions, auditor Deloitte’s prestigious  "Fast 50 Technology" award  - most recently in 2016.

As early as 2010, rexx systems launched the first participation programme, at that time only for executives.  Those who are in the programme regularly look forward to the company's high profit distributions.

Due to steady growth and many enquiries from interested employees, there was a need to widen the scope for participation to a larger group of employees.

At the end of 2016, the decision was made in principal to make an attractive offer, of directly sharing in the company's profits, to all rexx people who had reached a certain period of employment.   In the so-called "Windhund" (grey hound) process, the interested parties were able to register for the programme.  After just three tenths of a second after the opening of the distribution process more than 90% of the shares were given out.  After 8 tenths of a second the distribution process was finished! 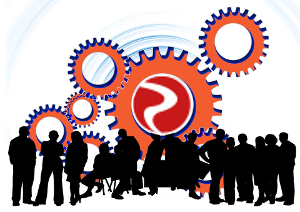 rexx employees are involved in the company as partners and enjoy profit-sharing rights.

More than half of the employees now directly share in the company's profits.  The forecast for the current year of 2017 is bright:  Growth during the first two months of the year was significantly above-average.

"Executives in other companies allow employees to choose and they make a big deal of it.  but at rexx systems, executives do not have a conventional role because we primarily rely on the independence and responsibility of all employees. Direct participation in the company with high profit shares for employees are the basis of our success, much more attractive than choice of executives" in the words of CEO Norbert Rautenberg.