“Why, wherefore, and what for? Those who don’t ask stay ignorant!”

A famous sentence from the German version of the Sesame Street theme tune, slightly modified, can also be applied directly to professional life. This is mainly because resignations of top employees are often met with surprise and misunderstanding in the boardroom. Still, there are a few things to look out for before it gets to the point where the best staff are leaving for the promised land somewhere else.

Just two words, but they can turn an entire professional world upside down – for employees and executives alike.

Because who doesn’t know it – that look. Initial surprise, followed by incomprehension, and finally disappointment all come together to create a cocktail that is difficult to define.

After all, a company’s employees are not just the foundation for its success; as brand ambassadors in the public eye and in the ‘war for talent’, they’re also excellent figureheads for attracting more talented people. But when one of them decides the company and its culture is not for them, the various executive committees too rarely come to grips with the problems at the heart of it. Instead, they sometimes secretly lash out by declaring the deserving employee persona non grata or even declare him or her a Judas who has betrayed the company for just a few more pieces of silver. 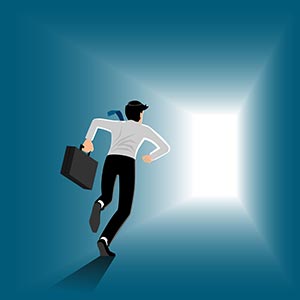 An online survey of more than 3,000 workers and employees, conducted by Forsa on behalf of Xing, showed that, in 2020, low pay (53 percent) still plays a major role in switching jobs. In the meanwhile, bad managerial behaviour (53 percent) has now achieved the same status. Poor relationships with colleagues (44 percent), lack of or insufficient recognition (43 percent), or monotonous or boring work (32 percent) have also become more important.

On the one hand, it is annoying to lose top talent, who may have been trained and promoted for years. On the other hand, it takes time and money to find adequate replacements – at the moment. Because in times of coronavirus and with the existing shortage of skilled workers, recruiting suitable candidates throws up even greater challenges than before, and it can all take a lot of time.

This is by no means an isolated case. After all, according to the ‘HR Study 2020’ statistical survey by the software house forcont business technology GmbH in collaboration with the Martin Luther University Halle-Wittenberg, looking for, finding and hiring qualified staff continues to be one of the most important tasks in HR at 34 percent.

Still, it doesn’t have to come to this. Executives and people in boardrooms should keep a few things in mind to put a stop to the massive exodus of qualified personnel.

‘People grow with their work’ is not just a hackneyed platitude – it’s key to motivating and engaging employees long-term. This does not mean extending working hours, however, but refers rather to challenges on an intellectual level. Excellent managers repeatedly challenge their best employees and try to keep the effort associated with stultifying and repetitive tasks as low as possible. After all, there’s no bigger motivation killer in the world of work than boredom.

New demands and fields of work mean that employees have to step out of their comfort zones time and again. Constantly thinking outside the box and the need to always find other, more creative solutions will mean they will make quantum leaps forward – especially in their professional development, but also in their personal development – to achieve goals that at first glance seemed unrealistic.

It is precisely at this point that superiors must start doing everything possible to support employees in any way they can, giving them the right scope for leeway and creative freedom that could lead them to success. After all, the most talented staff always want to improve everything, broaden their horizons, restructure or modernise outdated processes, and forge new paths without having to climb over persistent obstacles the executive circles put in their way.

It is precisely these obstacles that cause employees to feel increasingly uncomfortable and, in the worst-case scenario, to feel compelled to look for a new job where they have true freedom to develop.

Some people are born rhetoricians, motivators, or salespeople. Others can program code in their sleep or have visionary ideas just pop into their head. Usually, the most talented employees are often those who approach their work with passion.

Constructive employee appraisals are also important in order to provide consistent feedback, but also to set stimuli in the form of new tasks and goals. Otherwise, the danger is that they will be quick to sit back and complain instead of reaching their full potential.

An attentive manager recognises strengths and allows employees to exercise, intensify and pursue these qualities to further increase productivity and improve that feel-good factor in the workplace.

Still, many executives are sceptical and even gloomy because they fear the worst. Sinking productivity. These concerns are entirely far-fetched. After all, it has been proven in the past that employee productivity can improve by a factor of up to five if employees are pursuing something they are passionate about.

Prominent examples include companies such as LinkedIn or Apple, which take advantage of their workforce’s enthusiasm in self-devised projects that are close to employees’ hearts. Google was a successful pioneer for many years and incorporated this development into its own business model early on. It not only allowed employees to work on their own projects, but also purposefully promoted such independence and innovation. Successful products such as Google Maps, Gmail and AdSense came to light as a result of this.

Despite these success stories, the following also applies here: where there is light, there is also always shadow.

This is another reason you should carefully consider whether employee passions can be used in other ways or brought into existing projects to provide fresh momentum.

Stick to agreements and communicate recognition

This is always the case for promises, but for superiors it goes without exception: always stick to agreements! If agreements are not honoured, the damage is quickly done. Employees remember such things and find them disrespectful or unfeeling, which can change their opinion of their boss in the blink of an eye.

It also has a negative impact on the employees themselves. Why should staff keep promises and stick to agreements when their own superior does the opposite? A fish rots from the head down here. Broken promises, together with a lack of recognition, are among the top reasons for employees resigning. Superiors can really make blunders here.

The chain of causality starts with hiring the wrong people and ends with employees not being promoted – or even worse, with deserving employees being ignored, which is usually taken as a tremendous insult.

In fact, more than half of employees resign because of the relationship with their manager. For this reason alone, there must be a balance between professionalism and compassion. Because who wouldn’t want to work with a boss who celebrates and rewards their employees’ successes – from an obligatory pat on the back to raises and promotions?

Nowadays it’s also extremely important for staff to see managers showing empathy and compassion in difficult phases of life. Standing up for them in unfortunate circumstances or keeping an eye on their ongoing development without the manager consciously prioritising his or her own standing and progress in the company.

A company’s continued success is the overall driving force. It is of course always tempting to give work to the best employees. This can quickly lead, however, to the dilemma of burdening them with a workload that can result in a demotivating downward spiral for two reasons.

Firstly, the additional work might not be seen as a recognition of their skills, but rather as a punishment for their employment. Secondly, it could lead to being overworked, which is reflected in counterproductive overtime. Research findings from the renowned Stanford University reveal that productivity drops dramatically as soon as a workload exceeds 50 hours a week. If this is increased by another five hours, it should be immediately assumed that the work done no longer has any added value.

An increase in working hours should also never remain unremarked on and without consequences. The reason for an increase in the number of working hours has to be openly discussed between manager and employee, as must any possible rewards (a raise, promotion, more leave, better work-life balance, sabbatical, etc.) that might come with it. If not, the employee will start looking for a job that doesn’t leave him or her in the dark.

Principles that apply even more so to talented employees, so that you don’t present your own company with a fait accompli – a sudden resignation – out of the blue. Because then you’ll be standing there looking stupid, left out in the cold.